We have made a lot of progress since kickoff, and we would love to tell you about our robot so far!

This year for Relic Recovery we wanted to focus on scoring the glyphs and create ciphers.

After designing and prototyping a few different intake / claws designs we settled on a wheeled intake; however ours is more unique than most. We have a duel, bidirectional, spring loaded, omni wheel intake. The omni wheels had to be tiny, and we mean TINY. We had to order these 15mm omni wheels from a company in Australia to obtain wheels of this size. The intake is able to grab a block, and then lift it vertically; all in the same space.  This allows us to quickly intake and score sets of two blocks, and we even have a trick to reverse the order they dispense!

We chose to go with a 6 wheel drive base this year, because we felt it would be the most reliable in autonomous. We also are predicting that in later competition there will be defense being played in the glyph pit, and we want to be able to do well against that. Many have claimed that six wheel drive is harder to line up, however we have not found that to be the case.

In autonomous we use the same gyroscope PID based drive that won us Control at worlds last year. We are able to knock off the jewel while being completely stationary, thus making sure we do not loose our positioning on the stone. We are able to intake a second glyph, and score both into the correct column. We do this on the far side of the field, and to our knowledge very few teams are able to do this.

Currently we are working on a relic mechanism, and an autonomous for the stone closer to the audience. We are also improving the build quality of our intake to hopefully make it more efficient.

We're not around right now. But you can send us an email and we'll get back to you, asap. 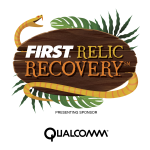